Best cities to learn Italian in Italy: Top Picks for 2020

The new year is here and many language lovers are asking us “What are the best cities where to learn Italian in Italy?”. In the past we have shared tips on the top Cities and Seasons for your Italian study abroad experience, as well as hidden gems where to study Italian. Although those articles are always useful in guiding and inspiring you, for 2020 we have selected two top cities that are ideal for your Italian language course: Arezzo and Assisi. Let’s find out what makes them special!

Arezzo is a fantastic city off the beaten path that provides you with an authentic view of Tuscany. It is only about 80km away from Florence and from Siena, on a hilltop overlooking the four valleys of Val Tiberina, Casentino, Valdarno and Valdichiana. While the area was already inhabited in the Palaeolithic era, the original foundation of Arezzo was Etruscan and dates to the 9th century B.C. Throughout the centuries it played an important role in Tuscany, thanks to its strategic position near the Roman Via Cassia. 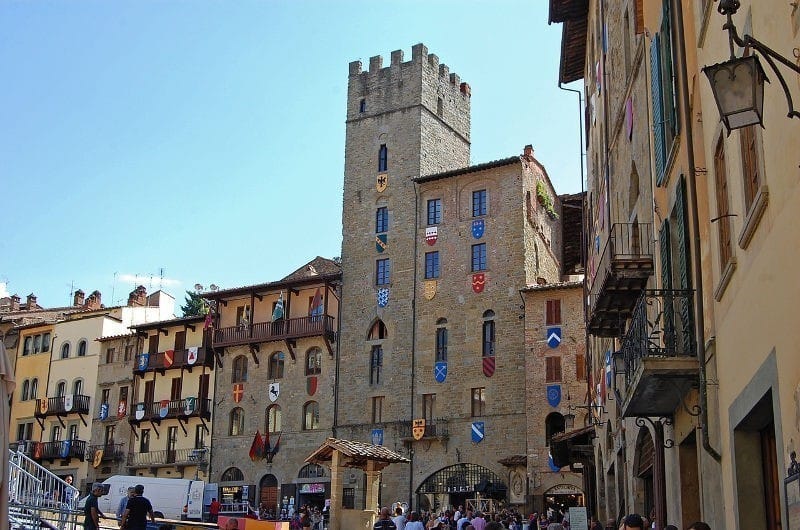 What is there to do in Arezzo? It has many beautiful monuments, museums, forts and churches for you to see while learning about the local history and art. For example, the 14th-century Basilica di San Francesco features the incredible Cappella Bacci where you can admire one of the greatest works in Italian art: the fresco cycle of the Legend of the True Cross by Piero della Francesca.

Art and archaeology lovers can enjoy different museums, such as the Museo di Casa Vasari, which was built and extravagantly decorated by Arezzo-born painter, architect and art historian Giorgio Vasari (1511–74); and the Museo Archeologico Nazionale ‘Gaio Cilnio Mecenate’, which overlooks the remains of a Roman amphitheatre and exhibits Etruscan and Roman artefacts. Other interesting places include the Galleria Comunale D’Arte Contemporanea, the Museo Diocesano di Arte Sacra and the Fortezza Medicea.

When studying in Arezzo, just like the locals you might end up spending some time around the impressive and sloping Piazza Grande, surrounded by the porticoes of the Palazzo delle Logge Vasariane and the Gothic-style Palazzo della Fraternità dei Laici. This square is where the city’s antiques fair takes place on the first Sunday and preceding Saturday of every month. And if you happen to be here in June or in September, don’t miss the medieval jousting competition known as ‘Giostra del Saracino’!

Would you like to learn Italian in this part of Tuscany? Learn more about the Italian Course in Arezzo here.

Our other top pick as best city where to learn Italian is Assisi, in the region of Umbria. Pilgrims have been coming here since the 13th century to honour St. Francis, who was born and buried here. But even for non-religious travellers, this is an idyllic town that is perfect for postcards in an area with great cuisine and wines. The town itself is a UNESCO World Heritage Site thanks to its fantastic buildings full of art and history!

The top attraction is certainly the 13th-century Basilica di San Francesco, where you will find the mesmerizing frescoes by Giotto, beautiful works by Cimabue, Pietro Lorenzetti and Simone Martin, and the crypt of St Francis. Other religious sites include the Basilica di Santa Chiara, Basilica di Santa Maria degli Angeli and Cattedrale di San Rufino. 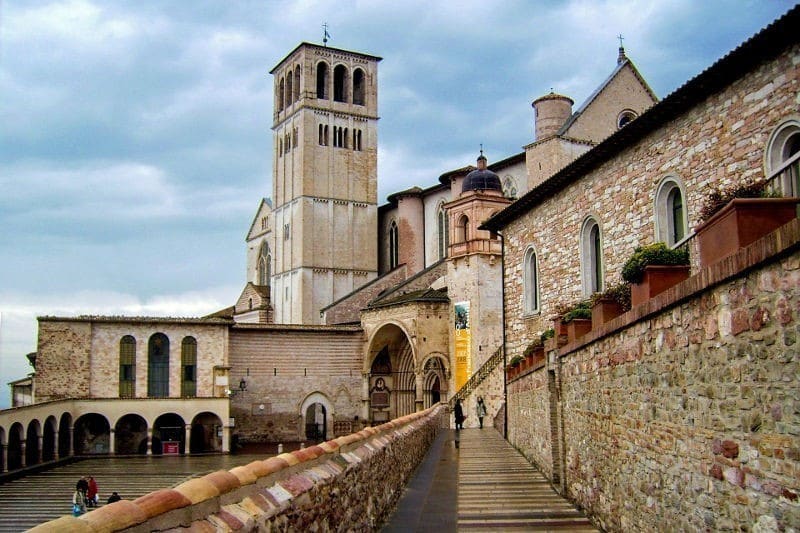 In Assisi’s main square and cultural hub, called Piazza del Comune, you will notice the 13th-century Palazzo del Capitano del Popolo with its Civic Tower, the elegant Palazzo dei Priori from the mid-14th century, and the Temple of Minerva, a preserved Roman temple from the 1st century BC, which now houses a church.

If you like hiking, there are some beautiful trails immersed in nature around Assisi in the mystical Monte Subasio Regional Park. One of them takes you to the Eremo delle Carceri, a monastery surrounded by oak woods and caves. In Assisi itself, don’t miss the hike up to the superb Rocca Maggiore, the fortress that was built in 1367 and that offers 360-degree views of Perugia and the surrounding valleys.

If you visit Assisi in early May, make sure to attend the four-day medieval festival of Calendimaggio. It features flag wavers, jousting shows, extravagant costumed parades and delicious food. Speaking of food, Assisi is part of the Strada dell’Olio DOP Umbria, the tasting route stretching along the hills of Assisi and Spoleto. This is where some of the region’s excellent PDO extra virgin olive oil is produced.

Would you like to learn Italian in this part of Umbria? Learn more about the Italian Course in Assisi here.

Modena: a great city where to learn Italian in Autumn and Winter 2020