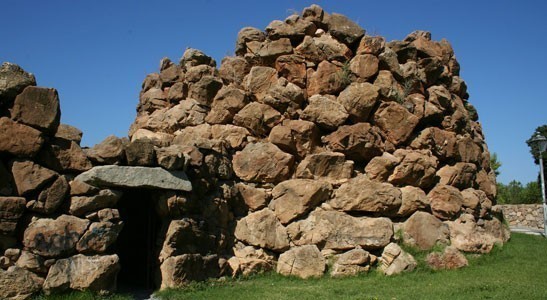 Sardinia is a striking island with ancient history and pristine nature. Today we will be exploring these features in three of its beautiful historic cities: Alghero, Cagliari and Olbia.

Are you in Catalunya? No, it’s Alghero!

Alghero is the only place in Italy where the Catalan language is co-official. It was introduced in 1353 when Catalan settlers repopulated the town after the Crown of Aragon conquered Alghero from the Genoese . In recent years, there has been a revival of the arts in “Algherese Catalan”, with singers such as Franca Masu performing original compositions in the dialect.

Alghero has a very interesting history, from pre-historic settlements all the way to the House of Savoy, passing through Phoenicians, Genoa, the Aragonese and the Habsburgs, among other civilizations and dominations.

The town is home to the archaeological site of Anghelu Ruju, the largest necropolis of pre-Nuragic Sardinia, tied to the Ozieri Culture in the Late Neolithic (3200-2800 BC).

Among other local attractions, Alghero Cathedral was built between 1570 and 1730, and features Catalan-Gothic, Late Renaissance and Neo-Classical styles; while Palazzo d’Albis offers a typical example of Aragonese architecture of the 16th century.

Among the wonders of nature that can still be appreciated in the territory of Alghero, are about 300 caves both above and under water. The most famous ones are Neptune’s Grotto, a breathtaking stalactite cave, and Nereo Cave, the biggest marine cave in the Mediterranean Sea and a paradise for scuba divers.

Cagliari’s Sardinian name – Casteddu – literally means castle, and the town is truly a precious place. The sparkling clear sea is framed by long strips of sand and green promontories, while the old streets reveal secrets of remote and recent history.

Let’s begin with the eco-friendliness factor: Cagliari is one of the “greenest” Italian cities. Apart from numerous lush public gardens and parks within the town, the nearby Molentargius-Saline Regional Natural Park is one of the most important places in Europe for the extraordinary number of birds that shelter there. Among these are flamingos, herons and little egrets. During summer, you can often admire flamingos fly above the rooftops of Cagliari!

Cagliari has an important history. In fact, from 1324 to 1848 it was the capital of the Kingdom of Sardinia (which eventually became the Kingdom of Italy in 1861). Just like Alghero, Cagliari’s earlier history was marked by the rule of several civilizations and dates back to prehistory.

Its province is home to the Barumini Nuragic complex, a UNESCO World Heritage Site. The Nuragic people were a civilization of Sardinia, lasting from the Bronze Age (18th century BC) to the 2nd century AD. The name derives from its most characteristic monuments, the nuraghes, tower-fortresses built with great blocks of stone.

Among other attractions are the Cittadella dei Musei (different museums with amazing artistic and historical collections); the fortified Castello district with the Medieval Bastion of Saint Remy and Saint Mary’s Cathedral; and the Necropolis of Tuvixeddu.

Off the beaten track in Olbia

As Lonely Planet puts it, “Often ignored in the mad dash to the Costa Smeralda, Olbia has more to offer than first meets the eye. […] You’ll find a fetching city with a historic center crammed with boutiques, wine bars and cafe-rimmed piazzas. Olbia is a refreshingly authentic and affordable alternative to the purpose-built resorts”.

The Bay of Olbia is home to Tavolara Island, a giant block of limestone that remains in pristine condition within the Marine Protected Area of Tavolara-Punta Coda Cavallo. A rare species of thorny knapweed, Centaurea horrida, is endemic to the island, which also attracts divers for its coral, sponges, sea anemones and bottlenose dolphins.

Local archaeological ruins suggest that ancient Olbia was founded by the Punics from Ancient Carthage, although the Cabu Abbas Nuragic Complex demonstrates that the area had been inhabited much earlier.

Olbia’s historic center treasures the Romanesque Church of San Simplicio, erected in the 1000s using only granite; and the Medieval Church of St. Paolo with baroque interiors.

If you are looking for a great destination where to learn Italian with an experiential language course, try Sardinia!

Studiainitalia, an Italian agency specialized in language courses and creative tourism, collaborates with great language schools on the island.

You can sign up for a unique program that combines Italian lessons with local activities, such as guided walking tours in the old towns of Alghero, Cagliari and Olbia; learning about the history and people of the Costa Smeralda; about the Red Coral along Alghero’s coast; and about Italian cinema through a movie screening in cosmopolitan Cagliari.

You can either sign up for Italian language lessons only in Cagliari or Alghero, or join the new program that allows you to choose from and experience two out of the three towns.

By continuing to use the site, you agree to the use of cookies. more information