Italian course in Bologna: 6 tips for a great study experience

Are you getting ready for your Italian course in Bologna or thinking about a study holiday in this beautiful city?

We have 6 tips for you to get to know Bologna differently from a tourist, to enjoy “Slow Travel” and to make your study abroad experience as genuine as possible!

A foodie paradise
Bologna is considered one of the most important food capitals of the world. It is known for its fresh egg pasta, for its quality gelato, and for the delicious Mortadella Bologna IGP. This is the perfect place where to taste the traditional lasagna, the original tortellini, the superb Parmigiano Reggiano and the prestigious white truffle from the Colli Bolognesi. You can learn about the ancient recipes and food traditions by joining a fun cooking course in Bologna!

A beautiful building not to be missed
The Archiginnasio palace was commissioned by Cardinal Borromeo in the mid 1500s. Bolognese architect Antonio Morandi, called “Il Terribilia”, oversaw the project that resulted in a wonderful building. The Archiginnasio served a university function until the early 1800s. It hosts Bologna’s Municipal Library since 1838. Among its delightful features are two large staircases, the Anatomical Theatre built by Antonio Levante in carved wood, and the “Spellati” (Skinned Men) statues by Ercole Lelli.

A surprising, unusual museum
Whether you already love caves, or you have never thought about the properties and history of karst landscapes, the Museo di Speleologia “Luigi Fantini” is an interesting place in Bologna. Here you will find numerous crystallization specimens and minerals from the Gessi Bolognesi area, and a collection of equipment used by the Bolognese speleologists since the foundation of the museum in 1932.

The amazing porticoes
Bologna features 62 km of porticoes, a unique aspect recognised by UNESCO’s list of World Heritage Sites. The porticoes started expanding in 1100, when new urban spaces were needed due to the growth of its University. They became private and public spaces where people could socialise and trade, an open-air salon that is today a symbol of Bologna’s hospitality. Take your time to explore the porticoes, and you will understand why Stendhal immortalised them in his travel diary “Voyages en Italie” (1826). 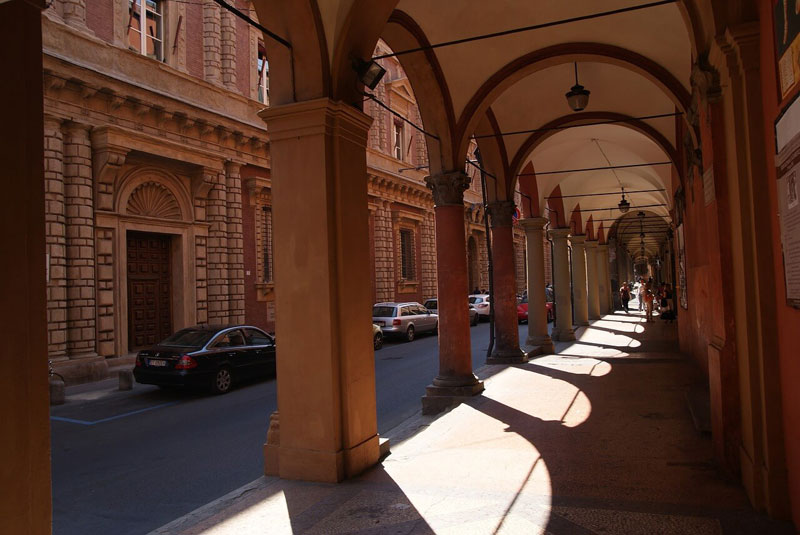 A word in local slang
When studying Italian in Bologna, you will surely have the chance to interact with the locals and to hear some typical words of the Bolognese slang. One of the most used expressions is “soccia” or “socmel”. Even though the literal translation can sound vulgar (“suck it”), it is used by people of all ages to express any type of feeling. For example, you can use it if you are surprised or if you are frustrated:

Soccia che storia! – in reaction to some news that you just received.
Socmel che traffico! – if you are stuck in traffic.

Our insider tip
Speaking of traffic, Bologna is a great place to explore on foot and on bikes. In addition to the cycle paths of the historic centre, you will also find amazing options that connect Bologna with other cities. One example is the Via degli Dei (Path of Gods), a trail that connects Bologna with Florence across the Tuscan-Emilian Apennines. It can be undertaken in four/six days walking, or in two/three days by bike. There is also a pedestrian and cycle path along the Navile Canal, running from the city centre to Bentivoglio between nature and industrial archaeology.

If you have already studied Italian in Bologna: did we miss any tips in your opinion? Comment below!

Recommended websites for more tips on Bologna:
Cappellacci a Merenda – an itinerary around the secret and unusual Bologna.
Bulgnais – a website in Bolognese to learn more about the dialect and the city.
Bologna Welcome – the official guide to never miss an event and the gems of Bologna.

Do you want to know more about our courses in Bologna?

Contact us: we will be delighted to assist you by chat, telephone or email. You can also request a virtual meeting to meet us online.

Italian course in Rome? 6 tips for a genuine study experience, the Roman way

Italian Course in Milan: 6 tips for the perfect urban experience