Sicily and its Mosaics – 2015 Mosaic Course 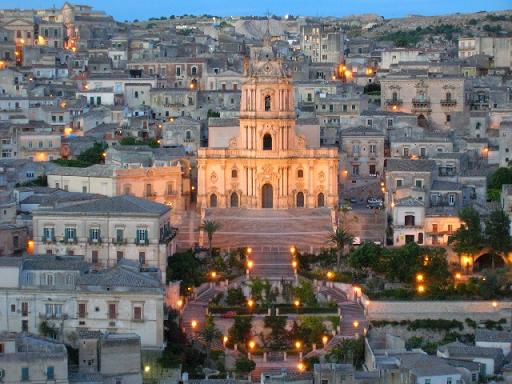 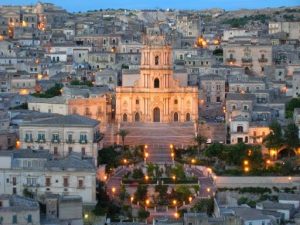 With its steeply stacked medieval centre and spectacular baroque cathedral, Modica is one of southern Sicily’s most atmospheric towns. But unlike some of the other Unesco-listed cities in the area, it doesn’t package its treasures into a single easy-to-see street or central piazza: rather, they are spread around the town and take some discovering. It can take a little while to orientate yourself in Modica but once you’ve got the measure of the bustling streets and steep staircases you’ll find a warm, genuine town with a welcoming vibe and a strong sense of pride.
An important Greek and Roman city, Modica’s heyday came in the 14th century when, as the personal fiefdom of the Chiaramonte family, it was one of the most powerful cities in Sicily.

Discover the town of Caltagirone and visit its famous Ceramics museum

Set amid fertile farming country, this charming market town takes its name from the Colle Armerino, one of the three hills on which it is built. It is actually two towns in one: the original Piazza was founded by the Saracens in the 10th century on the slope of the Colle Armerino, while a 15th-century expansion to the southeast was redefined by an urban grid established in the 17th century.
You can easily spend a day or two pottering about its labyrinthine streets and visiting the extraordinary mosaics at the nearby Villa Romana del Casale. With the addition of some pleasant accommodation and tasty restaurants, Piazza Armerina becomes an unexpected treat.
The Unesco-listed Villa Romana del Casale is central Sicily’s biggest attraction, and it reopened in spring 2013 after years of reconstruction. It is decorated with the finest Roman floor mosaics in existence. The mosaics cover almost the entire floor of the villa and are considered unique for their natural, narrative style, the range of their subject matter and variety of colour.

Caltagirone, an attractive hilltop town, is renowned throughout Sicily for its ceramics. The area’s high-quality clay has supported production for more than 1000 years and still today the industry is an important money-spinner. The town’s earliest settlers worked with terracotta but it was the Arabs, arriving in the 10th century, who kick-started the industry by introducing glazed polychromatic colours, particularly the yellows and blues that have distinguished the local ceramics ever since.
Everywhere you go in Caltagirone you’re reminded of its ceramic traditions, most emphatically at the Scalinata di Santa Maria del Monte, the town’s celebrated ceramic-inlaid staircase.
Caltagirone’s history dates to pre-Greek times but the town’s name is Arabic in origin, a derivation of the words kalat and gerun, meaning ‘castle’ and ‘cave’. Little remains of the town’s early incarnations as it was almost entirely destroyed by the earthquake in 1693 and subsequently rebuilt in the baroque style so typical of Sicily’s southeast.
SCICLI
About 10km southwest of Modica, Scicli is a pleasant country town with a charming baroque centre and a pretty, palm-fringed central piazza. Overlooking everything is a rocky peak topped by an abandoned church, the Chiesa di San Matteo. It’s not too hard a walk up to the church to admire the views over town – simply follow the yellow sign up from Palazzo Beneventano and keep going for about 10 minutes.

NOTO
Located less than 40km south of Syracuse, Noto boasts one of Sicily’s most beautiful historic centres. The pièce de résistance is Corso Vittorio Emanuele, an elegantly manicured walkway flanked by thrilling baroque palazzi and churches. Stunning at any time of the day, it is especially fabulous in the early evening when the lovely red-gold
buildings seem to glow with a soft inner light.

Although a town called Noto or Netum has existed here for many centuries, the Noto that you see today dates to the early 18th century, when it was almost entirely rebuilt in the wake of the devastating 1693 earthquake. Author of many of the finest buildings was Rosario Gagliardi, a local architect whose extroverted style also graces churches in Modica and Ragusa.

RAGUSA IBLA
Ragusa Ibla is a joy to wander, its labyrinthine lanes weaving through rock-grey palazzi to open onto beautiful, sun-drenched piazzas. It’s easy to get lost but you can never go too far wrong, and sooner or later you’ll end up at Piazza Duomo , Ragusa’s sublime central square.

East of the piazza, Corso XXV Aprile leads down to a second eye-catching Gagliardi church, Chiesa di San Giuseppe , with an elliptical interior topped by a cupola decorated with a fresco of the Gloria di San Benedetto (Glory of St Benedict, 1793) by Sebastiano Lo Monaco. Further downhill, to the right of the entrance of the Giardino Ibleo, you can see the Catalan Gothic portal of what was once the large Chiesa di San Giorgio Vecchio, but is now mostly ruined. In the lunette there is an interesting bas-relief of St George killing the dragon.

At the other end of Ragusa Ibla, the Chiesa del Purgatorio is one of the few churches in town to have survived the great 1693 earthquake.

ROMAN VILLA OF THE TELLARO

Going south towards Pachino on the main SP19 brings you to this Roman villa harbouring some fascinating mosaics. The villa was largely destroyed by fire in the 4th century, but a painstaking excavation has brought to light fragments of the original floor mosaics, which depict hunting scenes and episodes from Greek mythology.

MOSAIC COURSE – The basics
Course for beginners, curious and fans who will learn the basics of mosaic through the technique of direct laying. The course will take place in the laboratory in the heart of the historic Baroque Modica.
WEEKLY COURSE PROGRAM (First week):
• 20 hours, from MON to FRI, 9:00 -13:00
• A brief history of the mosaic, materials and mosaic techniques
• Cutting and preparation of the cards with the old tools “hammer and chisel”
• Study of trends
• Reproduction of a detail of Roman mosaic with the technique of direct laying on the final support.

THE MOSAIC COURSE INCLUDES:
• Materials (polychrome marbles and stones)
• Use of laboratory equipment
• The mosaic itself made during the course