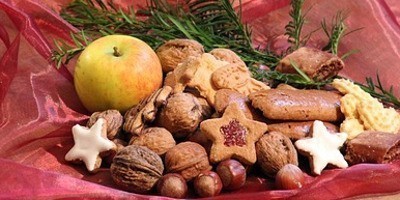 Every region in Italy has its own typical cuisine and food traditions, even during the Holiday Season. Some regions have more than one dolce di Natale and the best way to discover them all is to visit Italy and taste these delicious homemade sweets as you travel. To give you just an idea of how you can treat your sweet tooth during the Festive Season, here is a selection of 13 Italian Christmas Desserts, one from each region where you can learn Italian or join cooking courses and art workshops with Studiainitalia.

Buccellati in Sicily (Taormina)
These Christmas cookies originated in Palermo and are also known as cucciddati in dialect. A thin pastry wraps around a filling of dried figs and nuts, and other ingredients depending on the areas where they are prepared.

Certosino or Panspeziale in Emilia-Romagna (Bologna, Modena)
This ancient dessert originated in the Middle Ages, when it was made by pharmacists (known as speziali). Later, the friars of Certosa began preparing the panspeziale, and they were so good at it that the dessert changed name to certosino. Typical from Bologna, it is made with almonds, pine nuts, dark chocolate, and candied fruits.

Gubana in Friuli Venezia Giulia (Trieste)
This is a spiral-shaped cake of sweet leavened dough, filled with dried fruits, raisins and amaretto, and sparkled with grappa or slivovitz (a plum spirit).

Nepitelle in Calabria (Tropea)
The nepitelle calabresi are typically prepared for Christmas and Easter. Their name derives from the Latin word “nepitedum” (eyelids), because these sweets resemble a closed eye. They are filled with walnuts, dried figs, almonds, Strega liqueur, and dark chocolate or honey.

Pandolce in Liguria (Genoa)
This sweet bread with raisins, candied fruit and pine nuts originated in Genoa in the Middle Ages.

Pandoro in Veneto (Venice, Verona)
This is the most popular Christmas dessert in Italy along with Panettone. Shaped like an eight-pointed star and dusted in vanilla-scented icing sugar, it descends from the ‘pan de oro’ created in Verona in the 19th century to celebrate the first Christmas under the Scala dynasty.

Panettone in Lombardy (Milan)
The most famous Italian Christmas dessert, even abroad. It originated in Milan in the 9th century. The classic recipe includes flour, eggs, butter, raisins and candied fruit; although today there are many versions, for example with chocolate or pistachio cream.

Panforte in Tuscany (Florence, Siena, Lucca, Orbetello)
Originating in Siena as far back as the year 1000, the panforte is one of the most sumptuous Italian Christmas desserts. It is a dense, flourless, and heavily spiced fruitcake mixing honey, spices, candied fruit, and almonds. The name literally means “strong bread”.

Pangiallo in Lazio (Rome)
Ever since the times of Imperial Rome, pangiallo (literally “yellow bread”) is prepared on the day of the winter solstice as a good omen for the return of long, sunny days. That’s why it has a golden crust, given by the mixture of flour, oil and saffron. It includes dried and candied fruits and raisins.

Panpepato in Umbria (Todi)
This round, sweet-and-sour cake is made with walnuts, hazelnuts, almonds, cinnamon, nutmeg, chocolate, honey, raisins – and as the name suggests – even pepper.

Although you can find them throughout the year, the sebadas (or seadas) are typical of special occasions such as Christmas and Easter. They are a fried dessert with a savoury touch, filled with local pecorino and covered with corbezzolo honey. 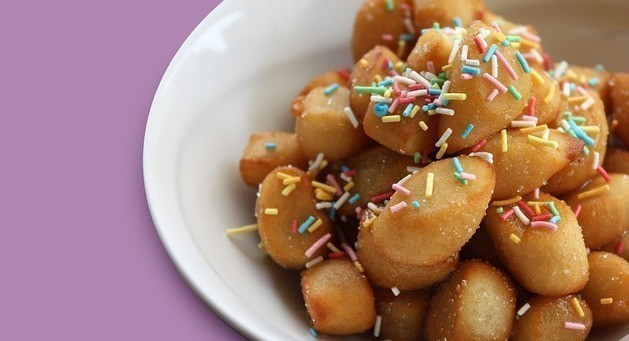 Struffoli in Campania (Naples, Sorrento, Salerno)
Originally from Naples, Struffoli are deep-fried little dough balls coated in honey, sprinkles and candied fruit. They are served once shaped into a Christmas tree or a pyramid.

Tronchetto di Natale in Piedmont (Turin)
Resembling a small tree trunk, this roll is made with eggs, flour and mascarpone, topped with chestnut cream and chocolate flakes.